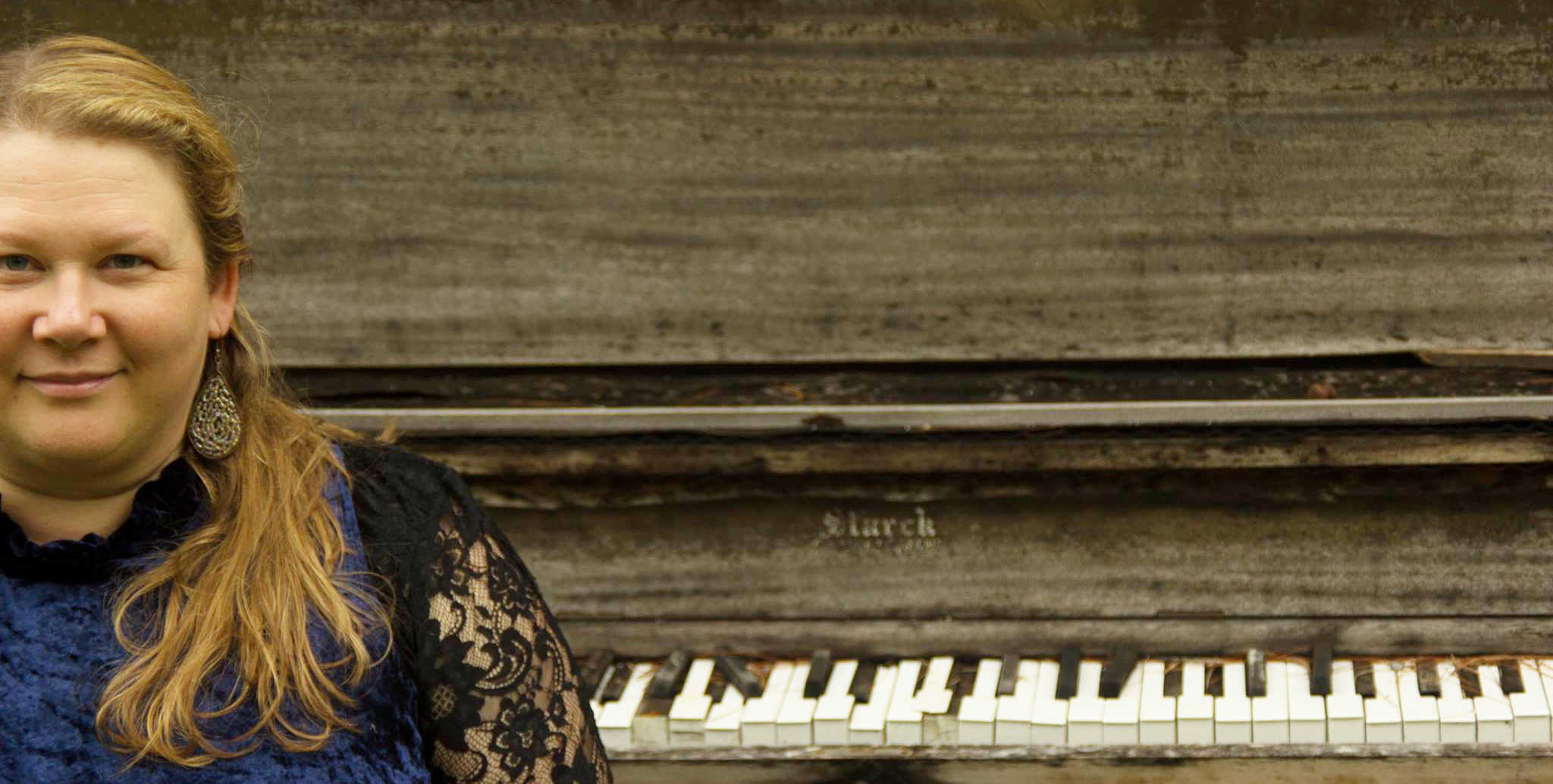 Julie Vallimont is, above all, a collaborator. Whether she is playing piano and accordion for dances,  teaching burgeoning musicians, assembling players to bring to life an album of her original music, or creating multimedia visual art, Julie’s work aims to connect with people and draw out the best in them.

Julie’s new album Dark Sky, Bright Stars is a series of these collaborations. She says, “I could have done this album solo, but I was more interested in having musical conversations with people.” The album contains fifteen original instrumental pieces recorded with a rotating cast of some of the Northeast’s finest folk musicians: Yann Falquet (who produced the album), Anna Patton, Becky Tracy, Katie McNally, Andrew and Noah VanNorstrand, Mark Roberts, Mia Bertelli, Daniel Hawkins, Rachel Bell, Kirsten Lamb, and Màiri Chaimbeul.  Some are frequent collaborators, and some met for the first time while making this album.  Julie arranged her tunes with the aim of showcasing the unique timbre and style of each instrument and player as they interacted with her nimble, expressive piano and accordion. The result is a delightfully varied and human collection of sounds, recorded mostly live at Maine’s Great North Sound Society.

The tunes aren’t all dance music, but they are imbued with and inspired by that feeling, that sense of lift and movement and space. They are stylistic descendants of the Celtic, Quebecois, and French traditions that make up the New England fiddle repertoire, but they’re also something a bit different: they’re more conceptual, like vignettes, or even songs that just happen to lack lyrics. To write the tunes that became Dark Sky, Bright Stars, Julie drew from her joyful experiences in the music community, and also from the emotional source of years of battling illness. The album is something of a concept album, whose central message is about embracing life’s difficult and beautiful moments – the stars are brightest when the sky is darkest.

Julie herself created the album cover for Dark Sky, Bright Stars, which consists of multilayered painted papercuts. In addition to her work with papercuts and pottery, several years ago, Julie fell in love with “crankies”: scrolls of paper that are illustrated and hand-cranked on spools to create moving pictures used in music and storytelling. Julie calls crankies “a magical synthesis of visual art, songs, tunes, stories, and puppetry,” and has taught crankie-making workshops at several camps and festivals.

Before making her new album, Julie has spent years making a name for herself as a performer, educator, artist, and sound engineer. A longtime classical pianist and organist, she now focuses primarily on traditional folk accompaniment and the joy of playing dance music. She currently tours nationwide with her duo Buddy System, and has performed with a number of other bands and artists, including Nor’easter and Firecloud.   Her newest project, a collaboration with Anna Patton, explores tunes, songs, poetry, and artwork in intimate, beautiful performances.

Fluent in a variety of folk dance music styles, Julie brings heart and creative, driving accompaniment to every project. She is also a founding member and board member of the BIDA (Boston Intergenerational Dance Advocates) dance in Cambridge, MA, where she harnesses the power of music and dance to build a community where all people feel welcome. Drawing on teaching skills developed over fifteen years as a natural science educator, Julie also enjoys teaching and leading workshops, and has taught at festivals and camps nationwide and internationally. An artist of skill and passion both broad and deep, Julie Vallimont is a uniquely creative person whose work delights and inspires.